A Successful Climate Transition Is a Just Transition 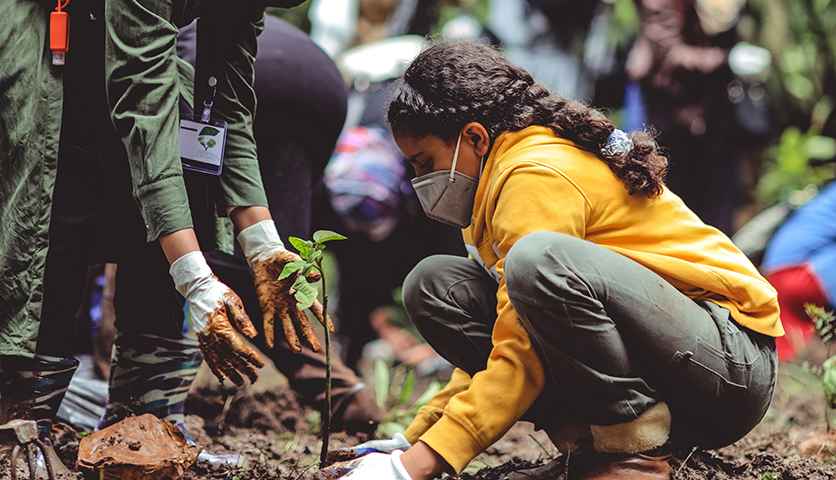 When I Google “famous climate activists” and “famous environmentalists,” the search engine returns a carousel of profiles it deems fitting of the description. Here’s who topped the list:

Just looking at these results, you might assume that Latinx and Black Americans are focused on other issues. But that couldn’t be further from the truth.

In fact, Latinx and Black Americans — relative to their white peers — are far more willing to mobilize politically to advocate for climate policies. In a survey conducted by the Yale Program on Climate Change Communication, more than one in three Latinx (37%) and Black (36%) respondents indicated that they would “definitely” or “probably” join a campaign to convince elected officials to take action to reduce global warming — in stark contrast to just over one in five white Americans (22%).

A recognition of these disproportionate impacts is at the heart of the climate justice movement. This approach to climate work advocates for protecting those systemically deprived of resources and most vulnerable to a harshening climate, as well as ensuring that the benefits of innovations are shared equitably. For donors and investors seeking to adopt these tenets, we’re sharing three approaches, along with examples of those approaches in action, you can take to bring a climate justice lens into your work.

Mitigate harm to the most vulnerable groups.

One strategy is to focus on protecting the most at-risk communities against the climate crisis. This is the approach adopted by Greenprint Partners, a project developer that helps cities scale nature-based infrastructure to reduce water pollution and flooding, with an intentional focus on historically disinvested communities.

Research shows that increased flooding resulting from climate change will disproportionately affect Black and low-income Americans. Thus, Greenprint Partners has incorporated an equity approach in their project sourcing, helping direct millions of dollars into green infrastructure investments in historically disinvested communities. These projects — from rain gardens to green roofs — are installed at community hubs such as schools, houses of worship, and health care facilities. This green infrastructure helps absorb heavy rainfall, reducing the risks of flooding and property damage in communities that have little infrastructure shielding them from intensifying rainfall extremes.

Another approach is to help strengthen communities so that they are best prepared to face the climate crisis head on. One area where this is best exemplified is food and nutrition, where vast disparities remain: Black and Latinx Americans experience significantly greater food insecurity, more than double that of White and Asian households. Not only has the climate crisis contributed to heightening food insecurity, but the situation is projected to only worsen.

The Fair Food Fund is responding to this crisis by building community health and wealth through food. The fund invests in early-stage enterprises that advance healthy food access, particularly those led by women and entrepreneurs of color. By providing catalytic capital, business assistance, and a network of resources, Fair Food Fund helps entrepreneurs expand affordable access to healthy food, reinforcing community resilience against food insecurity.

Ensure the benefits of climate solutions are shared equitably.

One of the key pillars of climate justice is equitably distributing the benefits of climate innovation. Access to climate solutions shouldn’t be determined by your zip code. But more often than not, that’s the case. Take solar energy for example: Black-majority census tracks have 69% less rooftop solar installed than those with no racial or ethnic majority (controlling for income); those with a Latinx majority see a 30% gap.

Organizations like Sunwealth work to change that. Sunwealth combats solar redlining, extending clean energy innovation to groups historically excluded from its benefits. It invests in community-based solar projects in low-income and communities of color across the U.S., bringing clean power, cost savings, and quality jobs to areas that otherwise would not have access to them.

People and the planet are fundamentally intertwined. While the climate crisis has the potential to deepen existing social injustices, thoughtful climate solutions have the power to advance a more equitable society. Indeed, a net-zero future is a hollow end goal if it precludes the most vulnerable communities — because a successful transition is also a just transition.

Bochu Ding is CapShift’s Impact Investment Associate. He is responsible for the investment product offerings appearing on CapShift’s platform, the due diligence of recoverable grants, and the execution of impact reporting. Previously, he was an Energy and Climate Practice Intern at 3Degrees, an environmental finance and consulting firm that provides custom renewable energy and climate solutions to utility and corporate clients.

Subscribe to our newsletter for regular updates on CapShift’s work.

Sign up for our monthly newsletter, chock full of tips about how you can amplify the impact of your capital.

Advisory services are provided by CapShift Advisors LLC, an SEC-registered investment advisor. Investments in securities are not FDIC insured, are not bank guaranteed and may lose value. Investing in securities involves risks, and there is always the potential of losing money when you invest in securities. Before investing, consider your investment objectives and CapShift Advisors LLC’s charges and expenses. CapShift Advisors LLC’s advisory services are designed to assist clients in achieving discrete financial goals. They are not intended to provide financial planning with respect to every aspect of a client’s financial situation, they do not incorporate investments that clients hold elsewhere, and they do not provide tax advice. For more details, see our Form ADV Part 1, Part 2 Brochure, and Part 3 CRS, available at https://adviserinfo.sec.gov/

Past performance does not guarantee future results, and the likelihood of investment outcomes are hypothetical in nature. Nothing on this website constitutes an offer, solicitation of an offer, or advice to buy or sell securities in jurisdictions where CapShift Advisors LLC is not registered.